On July 23, 1947, at the invitation of Mr. and Mrs. A.P. George, the following people met at the A.P. George farm for the purpose of organizing and establishing a hospital in Fort Bend County. Each of these individuals was asked to associate themselves with the hospital and each accepted: A.P. George, Mamie E. George, A.E. Myers, C.L. Dutton, J.A. Wessendorff, W.C. Minkwitz, Wharton Weems, P.E. Peareson, R.M. Darst, W.H. Morehead, and John M. Moore, Jr.

These public spirited citizens reviewed findings on the health needs of Fort Bend County and concluded that a real need did exist in this area for a hospital. The J.H.P. Davis home in Richmond, consisting of approximately twenty-five acres, was donated by Mr. and Mrs. A.P. George as the site for the hospital.

The hospital was completed with fifty-one fully equipped beds, and on January 15, 1950, the formal opening ceremonies of the hospital were held. The first patient was admitted at 8:00 p.m. on the same day. Since that time, the hospital has stood to serve all persons needing care.

In 1957, the facilities of Polly Ryon Memorial Hospital were expanded to care for the increasing number of patients requiring hospital treatment. Included in this expansion program was a new patient wing consisting of 26 private and two semi-private rooms and a nursing station with storage area. Other features included an emergency area, an autopsy room and storage space.

In 1962 and 1963, additions to Polly Ryon Memorial Hospital included a Physical Therapy Department and a surgery and recovery room. A complete Obstetrical Department, with fourteen patient beds, four labor rooms, two delivery rooms and a nursery was also added. The Business Office was remodeled and expanded along with the construction of the Administrator’s Office and Medical Records Department. The C.V. Nichols Memorial Library was also included in the expansion program. The estimated cost of the total expansion was over one-half million dollars. 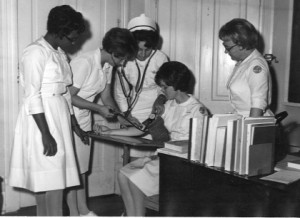 In 1969, the facilities of Polly Ryon Memorial Hospital were again expanded. A complete new wing was added which included 36 patient beds, a Coronary Care Unit with five beds, lobby, waiting rooms and modern nurses’ station with a separate unit for preparing medications. A chapel, donated by Mr. and Mrs. August Myers was also included in the new wing. Other areas that were added or expanded included new Laboratory, X-ray, dietary, mechanical and storage facilities. The estimated cost was again over one-half million dollars.

In addition to the medical services it provides, OakBend is also committed to the community’s overall health and wellness. The hospital conducts and participates regularly in community health fairs to provide blood pressure, glucose, and other tests at no cost. OakBend also collaborates with local organizations such as AccessHealth, Texana Center, EMS operators, Fort Bend County Department of Health and Human Services, Child Advocates of Fort Bend County, Richmond State School, and the Mamie George Community Center, among others.