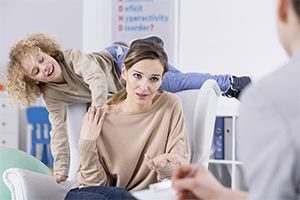 The Many Forms of ADHD

Children are naturally boisterous, but at what point does a short attention span and unruly behavior turn into something more serious?

Nearly 10% of all American children between the ages of two and 17 have been diagnosed with a behavioral disorder like ADD ADHD (Attention Deficit and Hyperactivity Disorder.) While the condition may be popularized to the point where parents may feel comfortable self-diagnosing, but it’s always best to learn as much as you can.

ADHD is defined as a neurodevelopmental disorder that affects around 1 in 20 children in the United States. It can affect adults, but diagnosis in adults is often missed or manifests in different ways.

The main symptoms to look out for when trying to determine if your child has ADHD is a pattern of behavior rather than a single occurrence of a specific symptom. Usually six or more symptoms of inattention or hyperactivity must be present for at least six months to determine whether or not a person truly has ADHD. Some behaviors to watch for are:

• Failing to pay close attention to detail or making careless mistakes
• Having trouble holding attention or focusing on tasks
• Not following through on instructions and schoolwork
• Having trouble organizing activities or tasks
• Losing necessary items needed for tasks (homework supplies, etc.)
• Easily distracted
• Often forgetful
• Often fidgets or squirms in seat, or leaves seat when remaining seated is expected (i.e., in a classroom setting)
• Feeling of restlessness
• Unable to play quietly
• Talking excessively, interrupting or blurting out words in conversation
• Trouble taking turns or waiting their turn

While the symptoms of ADHD are similar, there are three distinct types of ADHD that have been recognized by the scientific community.

• Combined ADHD features both of these traits.

How To Get Tested

A diagnosis of ADHD cannot be made by parents or teachers alone. Other conditions must be met to be diagnosed appropriately with ADHD. Out of seven or eight of the main symptoms of ADHD, at least six must be present. These six symptoms must have presented themselves before the age of 12 and be present in two or more settings—like at home and at school. There must be clear evidence that the symptoms interfere with quality of life or school functioning. They must not be explained by another disorder such as a mood or anxiety disorder. They need to happen consistently in more than one setting over the course of six months.

A physician can confirm a diagnosis of ADHD with help from parents and teachers. A physician will perform a thorough medical and family history, a physical exam, observation of the child, interviews with parents and teachers, behavior rating scales and a variety of psychological tests to determine if any learning disabilities are present. This will take place over the course of a few medical appointments so doctors and psychologists can get a true sense of the child’s symptoms.

ADHD can be successfully managed with the right treatment protocol. While a diagnosis can feel overwhelming, a multi-faceted approach to treatment can help both children and parents return to normalcy.

• Occupational and behavioral therapy is suggested as a first step, especially for children under six who are diagnosed with ADHD. Behavior therapy is an important part of treatment for children with ADHD, and can be helpful for both child and parents. Children will learn to strengthen positive behaviors and eliminate negative behaviors. Parents can also learn new skills in order to guide their children to better decisions and manage their behavior. In severe cases of ADHD, occupational therapy can help children learn how to sit properly at a desk or in a chair, and pay more attention to their surroundings.
• Medications are used in children older than six in conjunction with behavioral therapy. Some of the most widely known ADHD medications are stimulants (like Ritalin), which are fast-acting. Non-stimulant medications don’t work as quickly, but can last up to 24 hours.
• Lifestyle changes can encourage healing for families. These simple things can help children with ADHD:

ADHD is a manageable condition and with a little guidance and a correct diagnosis, families can live happily and successfully together.