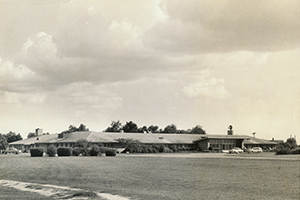 On January 15, 2020, OakBend Medical Center celebrated its 70th Birthday. During the past 70 years, the hospital has continued to service the community and to expand and grow. Today it is the largest healthcare system in Fort Bend County, and the only remaining independent hospital in the Greater Houston area. The hospital’s roots run deep in the community.

During this meeting, they reviewed findings on the health needs of Fort Bend County and concluded that a real need existed for a hospital in the area. Mr. and Mrs. A.P. George donated The J.H.P. Davis home, which consisted of approximately twenty-five acres, as the site for the hospital.

The hospital was completed with 51 fully equipped beds, and on January 15, 1950, the formal opening ceremonies of the hospital were held. The first patient was admitted at 8:00 p.m. on the same day. Since that time, the hospital has not wavered from its mission: To provide exceptional, compassionate health care for our community, regardless of ability to pay.

Due to the increasing number of patients requiring hospital treatment, in 1957 the facilities of Polly Ryon Memorial Hospital were expanded to include a new patient wing consisting of 26 private and two semi-private rooms and a nursing station with storage area. Other features included an emergency area, an autopsy room and storage space.

The needs of the community continued to grow and in 1962 and 1963, Polly Ryon Memorial Hospital spent over half a million dollars in renovations and expansion. The additions included a Physical Therapy Department and a surgery and recovery room. A complete Obstetrical Department, with 14 patient beds, four labor rooms, two delivery rooms and a nursery was also added. During the renovations and additions, the Business Office was remodeled and expanded along with the construction of the Administrator’s Office and Medical Records Department and the C.V. Nichols Memorial.

In 1969 it was necessary for the facilities of Polly Ryon Memorial Hospital to be expanded once again. A complete new wing was added which included 36 patient beds, a Coronary Care Unit with five beds, lobby, waiting rooms and modern nurses’ station with a separate unit for preparing medications. Additionally, other areas that were added or expanded included a new Laboratory, X-ray, dietary, mechanical and storage facilities. Once again, the cost was over half a million dollars to renovate the hospital.

On October 29, 1986, all but one wing of the facility was demolished and a new 185-bed facility was opened to better serve the community. In 2004, Polly Ryon Memorial Hospital changed its name to OakBend Medical Center.

In 2015, OakBend created a first-ever capital campaign. Vision 2020, a five-year campaign, provided for the comprehensive renovation of its Jackson Street Campus. It was designed to create an environment that reflects OakBend’s commitment to excellence. The completed projects included the renovation of the exterior of the building, improvements to the ICU, emergency and skilled nursing departments, and the full renovation of both the 4th and 5th floors. Remaining projects included in Vision 2020 include improvements to the first floor common spaces and elevators, along with additional upgrades in the emergency department and skilled nursing facility.

After Gulf Coast Medical Center in Wharton, Texas, closed its doors in November of 2016, the sign on the front door directed people to a hospital 20 minutes away. That can seem like an eternity if the patient is in pain or in need of urgent medical care. After a long and sometimes bumpy ride, OakBend Medical Center took on the challenge to establish a hospital in the building that formerly housed Gulf Coast Medical Center and bring emergency and medical services back to Wharton. It opened its emergency room doors on June 4, 2018.

Eight weeks after opening OakBend Medical Center-Wharton Hospital Campus, the hospital was exceeding expectations. From the opening on June 4th through July 30th, the hospital’s signature No Wait Hospital Emergency Room saw more than 1,500 patients. The radiology department had been busy as well, handling more than 1,300 patients with CT, ultrasound and x-ray services.