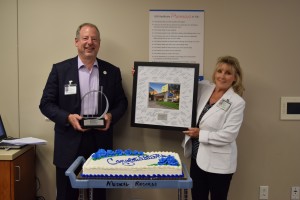 Joe began his career in healthcare, spending 10 years with Deloitte Consulting working with major healthcare systems around the country to improve their business operations, 11 years as CFO for two different hospitals and the last 10 years for OakBend.

During his career Freudenberger has, at one time or another, either overseen or reengineered the operations of almost every department in a hospital. Joe has a track record of successfully implementing operational and organizational change to help community hospitals regain their financial footing.

On June 19, 2007, Freudenberger joined OakBend as their Chief Financial Officer (CF0). Nine months later, when the hospital’s CEO stepped down, the Board of Directors asked Freudenberger to serve as the acting CEO. Within two months, he was named the as the new CEO.

During a hospital leadership meeting last week, Freudenberger was presented with a framed photo of the hospital with the well wishes from the leadership team written on the mat surrounding the photo.