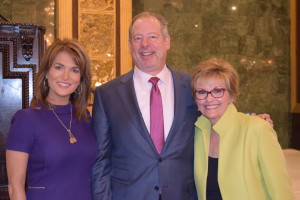 On April 6, 2017 the Volunteers of OakBend Medical Center held their second Power of the Pur$e fundraiser to raise money to help with the renovation of the hospital’s Skilled Nursing Unit.

The event, held at Safari Texas, included lunch and a silent auction of 31 purses ranging in value from slightly less than $100 to over $1,000. The keynote speaker for the event was LaDonna Gatlin, Texas humorist, singer and song writer, motivational speaker and sister to the Gatlin Brothers. LaDonna sang a couple of songs and spoke about each of the attendees having a song in their hearts and encouraged them to find that song and live their life to the fullest.

“This is the second year for this event,” stated Donna Ferguson, VP and COO of the OakBend Medical Group and Volunteer Liaison, “and one of the largest fundraisers the volunteers sponsor. This event adds a new dimension to their fundraising efforts and brings lunch and shopping together for a fun reprieve in the middle of the day.”

The volunteers work tirelessly at OakBend. So far from May 1, 2016 through March 31, 2017, they have donated a total of 10,578 hours to the hospital. If you break that down into 8 hour “days”, that is equivalent to 1,322 days. That is quite impressive, BUT, what’s even more impressive is that since they began keeping track of the volunteer hours, they have given 146,974 hours to the hospital or 18,372 days.