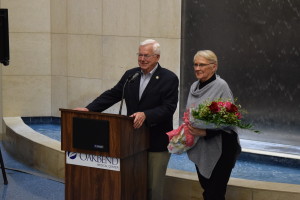 As the crowd gathered in the atrium of the Jackson Street Campus to honor two of the community’s most well-known residents, the words that could be heard most often were amazing, dedicated, caring and kind. The guests were describing Joe and Doris Gurecky.

“We are here tonight to really honor two people that have mean so much to the community in so many ways and have done so much for this hospital. Joe Gurecky is a former Board Member and a Former President of the Board of Trustees of the hospital and a former Mayor of Rosenberg. And we are here tonight to honor them in naming this Atrium the ‘Joe & Doris Gurecky Atrium’. It is a great honor for them and it is a great honor for the hospital,” said Jeff Council, the current president of OakBend Medical Center’s Board.

The program began with Joe Gurecky reminiscing about the first time he saw the “new” hospital. Joe’s parents were sharecroppers on the George Ranch in Richmond. One weekend his family came to Richmond to see the new hospital, named at that time, Polly Ryon Hospital. One of the doctors giving the tour wanted to show Joe about the fabulous new lighting that had been installed. A light that would cast no shadows.

“Look how far we’ve come,” stated Gurecky, “That was my first experience with the hospital and never in my wildest dreams, when I was that age, when I was the son of a sharecropper, did I ever think that Doris and my name would be on this wall. I thought today how fortunate we’ve been, God has been good to us.”

According to Joe Freudenberger, CEO of OakBend Medical Center, “The renaming of the atrium in our historical home hospital campus in Richmond to the ‘Joe & Doris Gurecky Atrium’ is the largest renaming project to date under our Vision 2020 capital campaign. We are extremely honored that the Gureckys chose to support OakBend’s efforts to transform healthcare right here in Fort Bend County, so that we might provide the highest quality medicine available to our community. Joe and Doris are amazing people. Joe has been an in integral part of OakBend for many years. Besides being a past board member and President, he and Doris were the 2014 Honorees at the Patchwork of Life: Precious Memories event designed to raise money to expand our Senior Behavioral Unit. He is an important part of our Health Exchange Advisory Board Executive Committee, meeting with us on a quarterly basis to advise and support us.”