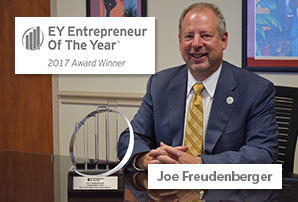 EY has announced that Joe Freudenberger of OakBend Medical Center, the last remaining independent nonprofit hospital in the Greater Houston Area, received the Entrepreneur Of The Year® 2017 Award in the Health Care category in the Gulf Coast Area. The award recognizes entrepreneurs who are excelling in areas such as innovation, financial performance and personal commitment to their businesses and communities. Freudenberger was selected by an independent panel of judges, and the award was presented at a special gala event at the Marriott Marquis on June 15.

“To win this award is an honor not just for me, but for my team,” stated Freudenberger. “At OakBend we strive to be innovative in all areas of patient care and have worked to create a unique system for delivering that care, such as the implementation of groundbreaking research-based programs including the Jack and Billie Wendt Acute Care for the Elderly (ACE) Unit and the hospital’s No Wait Emergency Room process. These programs utilize protocols proven to improve patient engagement, assure an appropriate level of care and shorten hospital stays. In just two years of operation, patients on the ACE Unit have an average length of stay that is 40% lower than the Medicare average. OakBend’s No Wait ER process has seen similar success, with total treatment time almost an hour below the national average. Research shows that reduced wait times in the emergency room and shorter hospital stays lead to significantly better outcomes.”

Freudenberger has led OakBend through a culture change in which the patient, not the caregiver, is viewed as the most important member of the healthcare team. He encourages every employee, whether clinical or non-clinical, to consider how their performance impacts the patient and make decisions accordingly. Under his leadership, OakBend has grown from one hospital to a system with almost 70 different service centers.
Since 1986, EY has honored entrepreneurs whose ingenuity, spirit of innovation and discipline have driven their companies’ success, transformed their industries and made a positive impact on their communities. Now in its 31st year, the program has honored the inspirational leadership of such entrepreneurs as:
• Howard Schultz of Starbucks Coffee Company
• Pierre Omidyar of eBay, Inc.
• Mindy Grossman of HSN
• Robert Unanue of Goya Foods
• Reid Hoffman and Jeff Weiner of LinkedIn
• Andreas Bechtolsheim and Jayshree Ullal of Arista Networks
• Hamdi Ulukaya of Chobani
• James Park of Fitbit