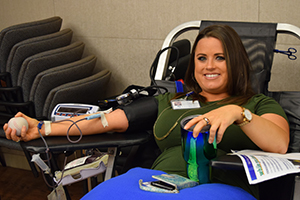 Donations included whole blood, plasma and double red cells. In fact, every donation received can help save as many as three lives. Whole blood donations are separated into three components: plasma, platelets and red blood cells. The double red cell donations allow the donor to give twice the amount of red cells. These cells are the most use components of blood and are used in connection with surgery, trauma and treatment of blood disorders. Plasma is the liquid portion of the blood. It transports the red and white blood cells and platelets (which control bleeding, fighting infection and provide nutrients). Burn and trauma patients are frequently given plasma to replace fluid loss.

Brandon Wiley, Manager of Dietary Services, admitted he was a bit reluctant to give blood but with some encouragement of his co-workers, he stepped up to the challenge. “It’s a good thing to do,” he acknowledged and in the end was glad that he could help save a life.