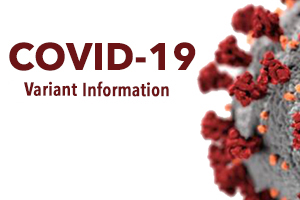 COVID Variants is it Greek to You?

As people get out and start getting comfortable, some with vaccines and some without, we are seeing new strands of COVID in the hospital and in FB county we are seeing more COVID positive tests. Could this be due to the new Delta variant first detected in India? In the hospital lab we do not check for the individual variant, but the County and State Health Departments do check, and the CDC monitors and it does appear there is an expansion. The expansion we are seeing right now does seem to be due to the Delta variant.

As an aside, just a word on the terminology. If you read or heard about COVID before May 31, you heard about B.1.1.7. Almost an alphabet soup or BINGO game and it was causing a lot of confusion, so they changed the terminology. We still have all those designations in the lab but they have given them letters of the alphabet. So, the first variant which was the one from Great Britain and that was B.1.1.7, that was eventually called the Alpha variant. We’ve now gone through several others and are at the fourth letter in the Greek Alphabet, Delta. At some point, we will probably run out of letters in the Greek alphabet because the mutations are going to keep on. But right now, the new variant that we are most concerned about and is most responsible for new cases is the Delta variant.

Because of vaccinations, we are not seeing as many new cases as initially. Additionally, people are still avoiding unnecessary contact. You still see people wearing masks, so I think there are still some of those methods that have probably kept it down.

A couple of weeks ago I had given an interview where I was full of optimism and forward thinking, but in just two weeks, we’ve seen a little bit of a turn around and now my optimism is tempered a little bit. I’m concerned that people relaxing their social distancing and mask wearing and the number of people that won’t get the vaccine and the increased infectivity of the Delta variant. It makes me concerned we may be going into yet another surge. We can’t say for sure yet, but in a few weeks we will know.

Unfortunately, confusion runs rampant, we have everything from masks are effective to masks aren’t effective; vaccines are effective, vaccines aren’t effective. Vaccines are going to microchip you and follow your every move or give you a genetic mutation, all this information is out there, and no one knows where to go to get the information. I do not know if it is just mask wearing that does what it does but if you look at what we did, which was mask wearing and social distancing, some combination of those two things reduced the spread respiratory viruses like COVID. The reason we know this is that when we started doing it in March of 2020, the flu season (and influenza is another respiratory virus that is spread similarly to COVID) ended prematurely. In the southern hemisphere, they did not have a flu season and when it got to winter in the northern hemisphere in 2021, we did not have a flu season. It is frustrating that no one ever brings that up; it is incontrovertible evidence there is no way you can argue that what we did didn’t demolish the flu season.

Anecdotally, very few people have had colds and many of us are getting use to not having colds and are enjoying the fact that masks and social distancing seems to be preventing colds, even if they aren’t fatal. There is no doubt that the mask wearing/social distancing was effective. The vaccine would make all that unnecessary, and it is unnecessary for people that are vaccinated. But because of the holdouts on the vaccine, we continue to see the disease popping back up again and possibly going into another surge.

Even though you have received the vaccine, note that it does not “prevent” getting COVID, you may still get COVID. Looking at the patients we have had admitted to the hospital for COVID, as far as we can tell none of them had been vaccinated. You can definitely get COVID, and you can spread it to others, but it is very unlikely that you would get seriously ill enough with it to be admitted. That being said, yes, when you get down to the very fine numbers, people that have been vaccinated have gotten COVID and some have died but that is very, very rare.  In fact, it is so rare that it even enters into my world. It is like worrying about being struck by lightning in your bedroom. It is something I don’t worry about and don’t want other people to worry about.

As of July 6, 2021, only 41.6% of Texas (approximately 29 million) have been fully vaccinated. While you think that there would be more there is a geographic difference and there is definitely a political difference. Again, this is incontrovertible, it is not a matter of opinion.  If you take the 2016 Electoral map where they paint the states blue and red and then if you flip it back and forth with a similar map where you take 70% of adults having one dose of the vaccine and paint the states that have that level blue and paint the states that do not have the level red, it is almost exactly the same map as the 2016 Electoral map with two exceptions, in 2016 Nevada voted blue and right now they are vaccine red and Pennsylvania is the opposite. Now, that said, there has always been a hard-core anti-vax group that has been around for a long time, and you can actually date them back to the 19th Century. But I think that is a small number. There is also a group that distrusts the healthcare system.

I think it is the mixed messages we received, especially at the national level, and now from media that has caused what I consider a disaster in public health. Some of us are old enough to remember when polio was still around, and if you liked Ike or you didn’t like Ike, you got your polio shot. This is crazy, when did this ever become a political thing? But it definitely is now.

There are others that believe that COVID isn’t real, but we have known about coronaviruses for a long time, and we’ve known about fatal coronaviruses since the early 2000 when we heard about the SARS epidemic. We’ve had infections by similar viruses since then and fatal. All countries are seeing the same thing, just not at the same time, but once it gets there, it has the same effect.

If anything prevents this disease from being wiped out, it will be at the grass roots level. Fear is a big factor and an adaptive response, but you have to keep it in perspective. On what basis do you fear a vaccine more than you fear a demonstrably fatal infection. Not only is it fatal, but if you survive it, it may be at the cost of weeks or even months in the hospital, permanently damaged lungs that require transplantation and other vaguer disabilities that may affect a nervous system. I would fear that more, what I like to say is “go with your gut but follow up with your brain.” A lot of times you make a snap decision, and you go what seems right at the time, but that is only when you don’t have enough time to think it out. Then you need to think it out and decide if you need to take corrective action on that initial decision. People should be motivated by fear and hope but they should back it up with their intellect and that’s what I’m not seeing them doing.

We would like to see 100% of the people vaccinated, but as we stated earlier, people don’t know who to trust to give the right information. Putting politicians aside, in every state of the Union as far as I know, the people that are working at the midlevel, like the policy people in the county and state health departments are dedicated professionals, they make decisions on science, they look at evidence and they draw conclusions from evidence. So, go to your health departments’ websites, they are going to tell you the right stuff. Sometimes they might get politically influenced, but the people at the midlevel are solid. The CDC made some missteps, perhaps they didn’t have as good a crystal ball early on as others did, but the people that work there are the best in the world and they know what they are doing and if you read the CDC website it is hard to go wrong with them. Ignore the news, go to the health department who care about keeping you well.

There has now been some controversy as to if, or when, children should be vaccinated. It all comes down to the nuts-and-bolts gumshoes work to determining if it is safe for kids. They are in the process of doing that and I suspect that eventually we see the vaccine approved for most age groups, including children, but it will be a matter of time.

Finally, there is the issue of masks being harmful. We have people who have worked in hospitals and in operating rooms that have worn masks all their life and now all of a sudden marks are harmful. Where did that come from? There was an article that got published in JAMA Pediatrics (a respected medical journal) stating that the carbon dioxide levels in a mask were toxic. It turns out when you look into it the person who wrote the article had already had his relationship with his university cancelled and he had no qualifications in toxicology. In fact, he wasn’t even and MD or PHD, he was a clinical psychologist. Somehow the article got through the process. That’s why there is a peer review to make sure that these kinds of things that are inaccurate don’t get published.

In closing it is ultimately up to the person as to get vaccinated or not.  I challenge you to explore the facts on the CDC website and do what is right for your family and this country.  If you have a question, please email me at physicianservices@obmg.org

Written by Dr. Edward O. Uthman, MD has over 43 years in anatomic and clinical pathology. He currently sits on the OakBend Board of Directors. He is a former Physician of the Year and Chief of Staff. He is currently serving on many committees, including the COVID ad hoc committee. He is the doctor patients rarely see.