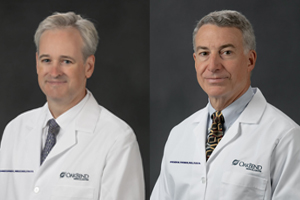 The OakBend Medical Group is pleased to announce the addition of Christopher Reilly, MD, FACS and Steven Thomas, MD, FACS to the group.

Dr. Reilly is a fellow of the of the American College of Surgeons and has been in private practice in the West Houston area since 1997. He specializes in bariatric surgery with advanced skills in gastric bypass and gastric sleeve procedures. Reilly is an expert in the use of the Lap-Band® and the Orbera® Intragastric Balloon. Additionally, Dr. Reilly has vast experienced in laparoscopic procedures such as colon and hernia surgeries as well as diseases of the breast, thyroid and biliary tract.

In addition to being a member of the American Medical Association, American Society of General Surgeons, American Society for Metabolic and Bariatric Surgery, and Harris County Medical Society, Dr. Reilly is a founding member and former president of the Houston Bariatric Society.

Dr. Steven M. Thomas has practiced in the west Houston area since 1991. He is trained and experienced in bariatric surgery with the primary focus of his practice being general surgery including, but not limited to, abdominal procedures, breast cancer, hernias, and thyroid surgery. He performs many of the abdominal surgeries laparoscopically, such as gallbladder, appendix, colon, and spleen removal as well as hernia repairs and he is trained in robotic surgery. Dr. Thomas prefers an attentive and personalized approach to helping his patients with their surgical issues.

In addition to being Board Certified and a Fellow of the American College of Surgeons, Dr Thomas has served on the Board of Trustees and has been Chief of Staff at West Houston Medical Center. Being honored as Physician of the Year, Opus Champion, and several times as a Houston Top Doc are among his many awards and achievements.

“We are extremely excited to have both Dr. Reilly and Dr. Thomas join OakBend Medical Group. They not only bring expertise, but they also allow OakBend to offer new and exciting services at our location,” stated Donna Ferguson, VP of Physician Services. “We look forward to a long and successful partnership.”