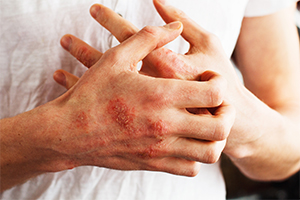 The human body’s immune system is a complex system of cells and organs that defend the body from germs and outside harm. When the body senses an intrusion, like cold and flu germs infiltrating the body, it makes antibodies—cells that attack the foreign intruder to destroy it—therefore healing the body from the inside out. The immune system is finely tuned to tell the difference between what cells belong to the body and what cells do not.
An autoimmune disorder is a flaw in the immune system where the body is unable to tell the difference between which cells belong to you and which cells mean you harm. This results in the body making autoantibodies, defense mechanisms that attack normal cells of the tissues and organs as if they were harmful. Simply put, the body mistakenly attacks itself. Autoimmune diseases can affect any part of the body, and as such, physicians and researchers have identified over 80 different types of these disorders. Some are well-known, like Type 1 diabetes, but others still remain unknown or under-researched
How do you get an autoimmune disease?
The causes of autoimmune diseases are generally not well-known. Some experts say that autoimmune diseases come from a variety of factors, including genetics and environmental conditions. Despite not knowing the root cause of autoimmune issues, more than 23.5 million Americans are currently diagnosed with one of the many autoimmune disorders that have been recognized in the medical community. They are a leading cause of death in the United States, and often are the main cause of disability or suffering in Americans. They can affect anyone, but certain groups are at a higher risk:
• Women of childbearing age are more at risk because more women than men have autoimmune diseases, and the diseases often present during their childbearing years.
• People with family history of autoimmune disorders are more at risk because some disorders (like lupus and multiple sclerosis) run in families.
• People who are around certain environmental conditions like sunlight, chemical solvents, or viral and bacterial infections may have an increased risk of autoimmune issues.
• People of certain races or ethnic backgrounds may be at a higher risk because some autoimmune disorders more commonly affect members of a particular race. For example, Type 1 diabetes is more common in white people, lupus is more common in African-American and Hispanic populations.
Four types of autoimmune disorders
There are more than 80 recognized autoimmune disorders. It’s always important to ask your doctor if you think you may have an autoimmune disorder or something feels off within your body.
Lupus is a chronic autoimmune disorder that causes damage to the skin, joints, and organs. It can cause extreme inflammation in these areas, leading to pain, fatigue, headaches, swollen joints, fever, anemia, swelling, rashes, hair loss, blood clotting disorders, and ulcers. Approximately 1.5 million Americans have some form of lupus, and over 16,000 new cases are diagnosed annually. Long-term lupus patients can also end up suffering from heart disease and stroke.
Psoriasis is an autoimmune condition that affects the skin, mainly causing thick red skin and silver scales upon the skin. Flare-ups typically happen around the elbows, knees, scalp, back, face, palms and feet, but can affect other places. Anyone can develop psoriasis, but the typical age of development is between 15 and 35 for both genders. More than 8 million Americans currently suffer from psoriasis. The skin cells in people with psoriasis grow at a faster rate, causing the buildup of painful lesions on the skin.
Celiac Disease is typically found in patients who have a family history of the disorder. It is a sometimes debilitating autoimmune disease where the body attacks the small intestine if gluten is ingested. The autoantibodies in people with celiac disease attack the part of the small intestine that is responsible for nutrient absorption, meaning that if celiac patients eat foods containing gluten, the small intestine does not absorb any of the other nutrients from the food they eat. Digestive symptoms are less common in adults than in children, but may include fatigue, joint pain, liver disorders, migraines, missed menstrual periods, or canker sores inside the mouth. Patients with digestive symptoms may have diarrhea, steatorrhea, or extreme weight loss. Celiac patients can manage their disease by adhering to a very strict gluten-free diet.
Multiple Sclerosis (MS) is a well-known autoimmune disorder where the body attacks the central nervous system. Our central nervous system is responsible for operating our brain, spinal cord and optic nerves. The disease causes inflammation that can surround the nerve fibers in our bodies, causing messages that travel between nerve endings to stall or stop completely. This often leads to intense pain, an inability to move certain muscles over time, and in most extreme cases, the loss of muscle and bodily function completely. MS is diagnosed using a series of MRI and CT scans, blood tests and physician examinations. There is no current cure, but effective treatment can slow the progression of the disease and manage flare-ups.
Treatment for an autoimmune disease
There is no one-size-fits-all treatment for autoimmune disorders, because each one presents with such different symptoms and challenges. If you think you may have an autoimmune disorder, talk to your doctor right away to rule out underlying or other issues and get the help you need to live a long and healthy life.
Disclaimer: The contents of this article, including text and images, are for informational purposes only and do not constitute a medical service. Always seek the advice of a physician or other qualified health professional for medical advice, diagnosis, and treatment.