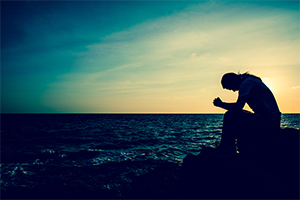 When people hear the term post-traumatic stress disorder, they often think of war veterans, or service members in the military who have been in active combat. Post-traumatic stress disorder, or PTSD, is certainly common in fields like law enforcement or military service, but can happen to anyone.
PTSD is a disorder that develops in some people who have experienced a dangerous, traumatic, scary or shocking event or situation. Every human being has the chance to experience a situation like this in their lifetimes, so every human is at risk for PTSD—but only some people develop it.

What is PTSD and how is it different than other types of mental illness?
PTSD can develop after a traumatic event that is beyond a typical, everyday annoyance or bad day. Events that may trigger PTSD are:
• Violent assaults
• Natural disasters
• Accidents
• Combat
• All forms of violence
Because exposure to these events is common, about half of American adults will experience one of these traumatic events in their lifetime, but only 3.6% of them will develop PTSD. It’s human nature to feel fear when witnessing or being a victim of one of these traumatic events. The feeling of fear in the human body triggers a special psychological response known as “fight or flight.” This response is meant to help protect us from danger or enemies. When faced with a dangerous situation, the body responds in one of two ways: standing ground and fighting the situation, or fleeing the situation for safety.
Following a traumatic event, most people recover from symptoms over time. People who have gotten into car accidents eventually feel comfortable getting behind the wheel once more. PTSD sufferers feel the immediate emotions of a traumatic event long after the event has passed—almost like the event just happened.
PTSD is different than other mental health conditions because it is triggered by a specific event or situation.
How is PTSD recognized and diagnosed?
Not everyone who experiences a traumatic event develops PTSD, and not everyone with PTSD has been through a dangerous event—it all depends on the brain’s interpretation of people, places and things that may seem dangerous, or were once dangerous in the past. Symptoms of PTSD usually begin between three months and one year of a traumatic incident and may include:
• Flashbacks—reliving the traumatic event over and over, including physical symptoms
• Bad dreams
• Frightening or stressful thoughts
• Staying away from places or objects that are reminders of the traumatic event
• Avoiding thinking about the traumatic event
• Being easily startled
• Feeling tense or on edge
• Having difficulty sleeping
• Being prone to angry outbursts
• Trouble remembering the key features of the traumatic event in question
• Negative thoughts about themselves or the world
• Feeling guilty or blaming themselves
• Loss of interest in activities once enjoyed
• Constantly looking for possible threats
A mental health medical professional is the only one that can diagnose PTSD, as an official diagnosis of PTSD means that the patient has at least one re-experiencing symptom, one avoidance symptom, two reactivity symptoms and two mood symptoms for at least one consecutive month.
Do you have to experience a really horrific event to have PTSD?
To put it simply, PTSD is a condition that essentially proves how your brain processes dangerous information. Because only three to six percent of the American population will develop PTSD, but almost 80% of the American population witnesses or is involved in a traumatic event, not all people who experience a horrific or traumatic event develop PTSD—and not all people who develop PTSD experience a horrific or traumatic event. Essentially it comes down to what is traumatic for you specifically, and how your brain chooses to process that information and how it uses its “flight or fight” response.
Can only adults get PTSD?
Every human is at risk for PTSD because every human is at risk for traumatic events, including children. All children may experience stressful events that effect how they feel, though most of the time they recover quickly. Some children who witness or experience severe stress, like the death of a close family member or friend, can be affected long-term by PTSD. For the most part, the symptoms of PTSD in children are the same as PTSD in adults, with the addition of behavior disorders. Children who have experienced a traumatic event may seem fidgety, restless, or have trouble paying attention, and are often misdiagnosed as having attention deficit/hyperactivity disorder.
How do you treat PTSD?
Like any mental illness, PTSD can be treated with either cognitive behavioral therapy, carefully selected medication, or a combination of both. A mental health professional can help PTSD patients decide what road to wellness is best for them. Cognitive therapy can be in a group or individual setting, and can teach the patient to reframe negative thoughts about the trauma to process and make sense of the incident. This may be used in conjunction with SSRI/SNRI medications, which restores the balance of naturally occurring chemicals in the brain.
PTSD does not have to be a lifelong sentence of trauma and misery. With help from mental health professionals, PTSD can be managed and patients can learn skills to cope with future traumatic events in a way that prevents an occurrence of the condition.