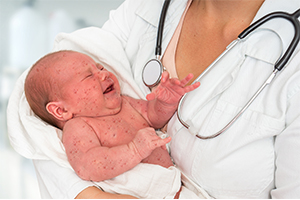 What You Don't Know About the Measles Can Hurt You

Measles, sometimes referred to as rebeola or red measles, is a highly contagious respiratory infection that can spread through the air when an infected person breathes, coughs or sneezes. The virus can float in the air up to one hour after someone coughs or sneezes indoors.
As of today, there are seven cases of measles reported in Texas. And, while none have been reported in Fort Bend County, the Center for Disease Control (CDC) has reported that there are three active cases in Harris County.
The spreading of this disease can be stopped. All that is needed is the vaccine MMR (measles, mumps and rubella) and MMRV (measles, mumps, rubella and varicella [chicken pox]). In general most children get the vaccine as part of their regular shots which is why measles are rare in the U.S.
There is a faction of parents that believe the MMR Vaccine can cause autism in their children. As in most controversies, there are two sides but the CDC published a study stating that there is no link between vaccines and autism.
On average it takes between seven and 14 days after exposure to see signs of the measles with the first noticeable sign being high fever of 102+ then two to three days after the fever the characteristic red rash begins to form at the hairline and travels downward. Other symptoms include a cough, red watery eyes and runny nose. Measles are contagious four days before and four days after the onset of the rash.
Measles are so contagious that 90% of unvaccinated people that are exposed will get the infection. So what can you do? If you are a parent, please get your children vaccinated. The first dose (MMR) is administered between 12 and 15 months and the second dose (MMRV) should be administered between the ages of four and six. The first shot is 93% effective in preventing measles and the second shot is 97% effective.
If you are an adult traveling abroad, check the CDC website at www.cdc.gov to see if there is an outbreak in the country you are planning to visit. Currently Europe, Africa, Asia and the Pacific all have outbreaks of measles. If you are not sure you have been vaccinated there are two options. The first is to have a blood test done but this extremely expensive and take a while to get the results. The fasted and easiest way is to get the vaccine. Even if you were inoculated as a child, getting the shot again is not harmful.
Should you suspect that you or your child has contracted measles, consult a physician immediately. While there is no specific treatment for measles, lab tests can be done to confirm the infection. Once you or your child has the measles, you can expect for it to take approximately three to five days before the rash to begin to fade. Without complications those that have measles usually start to recover as soon at the rash appears and feel back to normal in two to three weeks. However, up to 40% of patients have complications which can lead to pneumonia and even death especially in young children and older adults.
Disclaimer: The contents of this article, including text and images, are for informational purposes only and do not constitute a medical service. Always seek the advice of a physician or other qualified health professional for medical advice, diagnosis, and treatment.