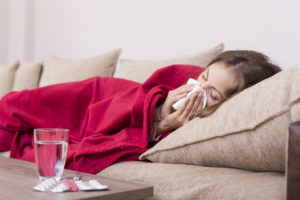 The Endless Fight Against the Common Cold

As the weather changes from summer to fall every year, most people are also changing—pulling out winter coats from closets and basements and drinking more hot tea than iced. They’re also fighting a war they are sure to lose: the common cold.
The Common Cold
In the United States, common colds are the main reason that children miss school and adults miss work. Each year, there are millions of cases. Adults can have an average of three colds a year and children can potentially get even more. Most commonly caused by rhinoviruses, the common cold is constantly adapting and changing to surroundings, meaning that it has persisted in the human race for a long time and will continue to cause us discomfort, especially during the fall and winter months.
Even though chances are higher that you’ll develop a cold in the colder months, colds can spring on any time—after all, they’re not just caused by the rhinovirus—they can be caused by the respiratory syncytial virus, human parainfluenza virus, adenovirus, human coronavirus, and human metapneumovirus.
Avoiding the common cold is possible, but often difficult. After all, it’s common for a reason—simple exposure to someone with a cold or a change of season can increase the risk factor for developing one.
Symptoms, Treatments and Protection
Symptoms of the common cold usually include sore throat, runny or stuffy nose, coughing, sneezing, watery eyes, nasal drip, headaches and occasional body aches. These symptoms can last from a few days to up to two weeks, but if they last longer, see a doctor. Because the common cold is caused by a virus and not a bacteria, antibiotics cannot cure the common cold. Runny noses and sore throats from colds almost always get better on their own, but symptom relief is possible—there is no cure for the cold and medicines only treat symptoms. Rest and over-the counter medicine are the best relief for the common cold—that and plenty of water.
Sometimes the best way to fight the common cold is to avoid it altogether. There are several common sense steps you can take to avoid getting sick:
• Wash hands often with warm, soapy water for at least 20 seconds after using the restroom, handling food, before and after eating, and after coming into contact with a lot of people or pets. If soap and water are not available, use an alcohol-based hand sanitizer.
• Avoid touching your eyes, nose and mouth with unwashed hands. Viruses and germs travel fast and even faster if they have prime access to your nose and mouth.
• Stay away from people who are sick. Do not eat or drink after people who are sick, or get too close to their eyes, nose or mouth. If you are sick, stay at home and avoid close contact with others.
There are also plenty of ways you can protect others if you do come down with a cold:
• Stay home when you’re sick.
• Avoid close contact with others when you’re sick, like hugging or kissing them.
• Move away from people when coughing or sneezing and try not to cough or sneeze directly into your hands (try a tissue or your elbow, i.e. the “vampire cough”)
• Wash your hands frequently after coughing, sneezing or blowing your nose
• Disinfect frequently touched objects and surfaces frequently
What about the Flu?
Because the common cold and the flu share many symptoms, they are often confused. Flus and colds are both respiratory illnesses, but caused by different viruses. In general, the flu is much worse than a cold and the complications from it have much more serious consequences. 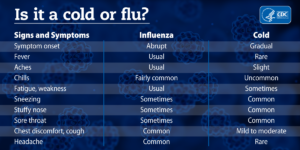 Image credit: Centers for Disease Control
The symptoms of the flu can include fever, chills, cough, sore throat, runny or stuffy nose, muscle or body aches, headaches and fatigue. While colds do not usually result in serious health problems, complications of the flu can have life-threatening consequences.
Protect Those Who Can’t Protect Themselves
There are some people who are more susceptible to sickness than others. These people may be immunocompromised or otherwise unable to fight off the slight sicknesses and colds that are a part of being human and living among humans. The following list includes people who are at a higher risk of developing the flu and suffering from its complications:
• People who are 65 years of age or older
• People of any age with certain medical conditions (asthma, diabetes, or heart diesases)
• Pregnant women
• Children younger than 5 years of age
• People who have certain disorders of the liver, kidney, metabolism, endocrine system or blood system
• People who have chronic lung diseases like COPD or cystic fibrosis
There are ways that low-risk individuals can protect themselves and others against the flu. First, get a flu vaccine. You are able to infect someone with the flu one day before symptoms begin and can be contagious up to seven days after becoming sick. Follow all the guidelines for protecting against the common cold. Second, take the flu seriously. Do not attempt to treat the flu yourself with over the county medications or not treat it entirely. The flu can have severe complications that can lead to death—and in some recent cases this has become a reality.
The flu virus, like the common cold, adapts to its environment. It is becoming stronger and smarter, and resistant to treatment. Make sure to equip yourself to outsmart it year after year.
Disclaimer: The contents of this article, including text and images, are for informational purposes only and do not constitute a medical service. Always seek the advice of a physician or other qualified health professional for medical advice, diagnosis, and treatment.